Over 200 million women alive today have experienced FGM/C, mainly in sub-Saharan Africa, Asia and the Middle East and North Africa (WHO, 2018).

FGM/C is internationally recognised as a violation of the human rights of women and girls. It constitutes an extreme form of discrimination against women and reflected deep-rooted inequality.

FGM/C and child marriage also increases the risk of girls dropping out of school. Without an education, they lose the opportunity to learn the skills and knowledge needed to provide for themselves. These factors perpetuate the cycle of inequality – locking millions of girls into poverty.

Pauline shares her story of life beyond FGM/C and child marriage:

‘I did not choose my husband’, says 15-year-old Pauline from West Pokot, Kenya, ‘I don’t like him, but I have to because he is my husband’.

Forced to leave school because her parents couldn’t afford it, Pauline underwent FGM/C, aged 10, and was married off shortly afterwards.

‘My parents wanted me to get married off to get some cows’, she explains. ‘I couldn’t have avoided it. I did not know that the cut (FGM/C) meant that I would then be forced to be married. I knew nothing about marriage or pregnancy’.

‘Faith will not be cut. She will go to school. I wouldn’t want my children to undergo the cut because I want them to go to school’.

Pauline is now part of an ActionAid-supported women’s group working to advocate against FGM/C and child marriage.

While FGM/C and child marriage are complex issues – reflecting larger societal inequalities- ActionAid believes that change is possible, particularly by working at a community level.

ActionAid believes that bringing an end to FGM/C and child marriage requires changes in attitudes and behaviour at all levels of society. This means talking openly about the damaging social, physical and psychological impacts of these practices.

We also engage with influential members of the community, such as traditional elders and religious leaders so they can speak out and influence others.

ActionAid’s Irish Aid funded Women’s Right Programme is currently using an innovative behaviour change methodology to combat child marriage. Again, this involves working with community members at all levels and asking them to analyse their behaviour and how it can promote child marriage.

By better understanding behaviour, communities can learn how it can be changed and acts as leaders of change.

See what’s next after signing our petition against Child Marriage and FGM. 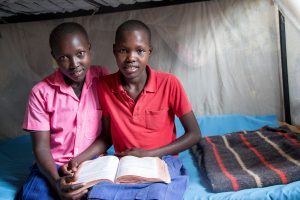