Sotiria Kyriakopoulou is in Dublin on Wednesday 16th November to launch Women, War and Displacement a joint report by members of the Irish Consortium on Gender Based Violence (ICGBV). Sotiria is Protection Manager for ActionAid Hellas; her role is focused on the protection of women and the most vulnerable people as part of ActionAid’s response to refugees on Lesvos Island and in Athens. 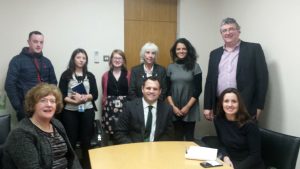 On Tuesday 15th November Sotiria presented to TD’s, Senators and their representatives in Leinster House. She discussed the situation for women refugees in Lesvos and Athens and how ActionAid is responding to the specific needs of female refugees.

In addition, case studies drawn from the programmes of ICGBV membership agencies are featured in the document, giving voice to women who have experienced gender based violence as a result of conflict and displacement. You can read the report Women, War and Displacement here.

ICGBV was formed in 2005 and brings together Irish humanitarian and development organisations, Irish Aid and the Irish Defence Forces, in an effort to combat gender based violence.

Why is ActionAid working with women and the most vulnerable?

The increased restrictions on refugee movement in Europe mean people are spending longer periods in overcrowded transit locations. This has led to a progressively deteriorating humanitarian situation with regard to women’s vulnerability to sexual assault and exploitation in overcrowded camps. The issues identified include:

ActionAid’s programme provides psycho-social support to women facing trauma as a result of the conflict they fled, their journey and their displacement. In specially designed women friendly spaces, services offered are:

Sotiria is Protection Manager for ActionAid Hellas, her role is focused on the protection of women and the most vulnerable people as part of ActionAid’s response to refugees on Lesvos Island. Sotiria coordinates the ActionAid team of cultural mediators and psychosocial experts in Lesvos and provides them with guidance when required. She facilitates training for the team and intervenes in the most complex cases. She also represents the organisation in the working groups that try to address critical gaps in response.

For the past 10 years, she has been working in settings in Greece and Scotland with vulnerable and marginalised groups of people. Her background is in Psychology and Counselling, helping her to work in a person-centred and respectful manner and by always abiding with the Humanitarian Code of Conduct.