ActionAid partners from Liberia visited Dublin and Cork, Ireland from the 5th– 12th of February 2018 to raise awareness about Female Genital Mutilation / Cutting (FGM/C) and share their expertise to end this harmful cultural practice.

The Testimony Tour is part of a two year project by ActionAid Ireland to end FGM/C in Ireland. The Against FGM through Empowerment & Rejection (AFTER) project is funded by the Rights, Equality & Citizenship Programme of the European Union to work with migrant women and girls from FGM/C practicing countries.

About the speakers from Liberia

Elizabeth Dato Gbah, Head of Programmes and Policy at ActionAid International Liberia, is an advocate for women’s rights and empowering women and girls to challenge and reject violence. Elizabeth facilitated the process that led to the formation of the only HIV-positive women’s network in Liberia. She also led the “Safe Cites for Women Campaign” to address sexual harassment in universities and higher education institutions.

Marian Deah, Executive Officer of Liberian NGO, Women Solidarity Incorporated, who are a partner of ActionAid Liberia. Marian works to raise awareness on human rights violations, abuses and health complications arising from the practice of FGM/C. 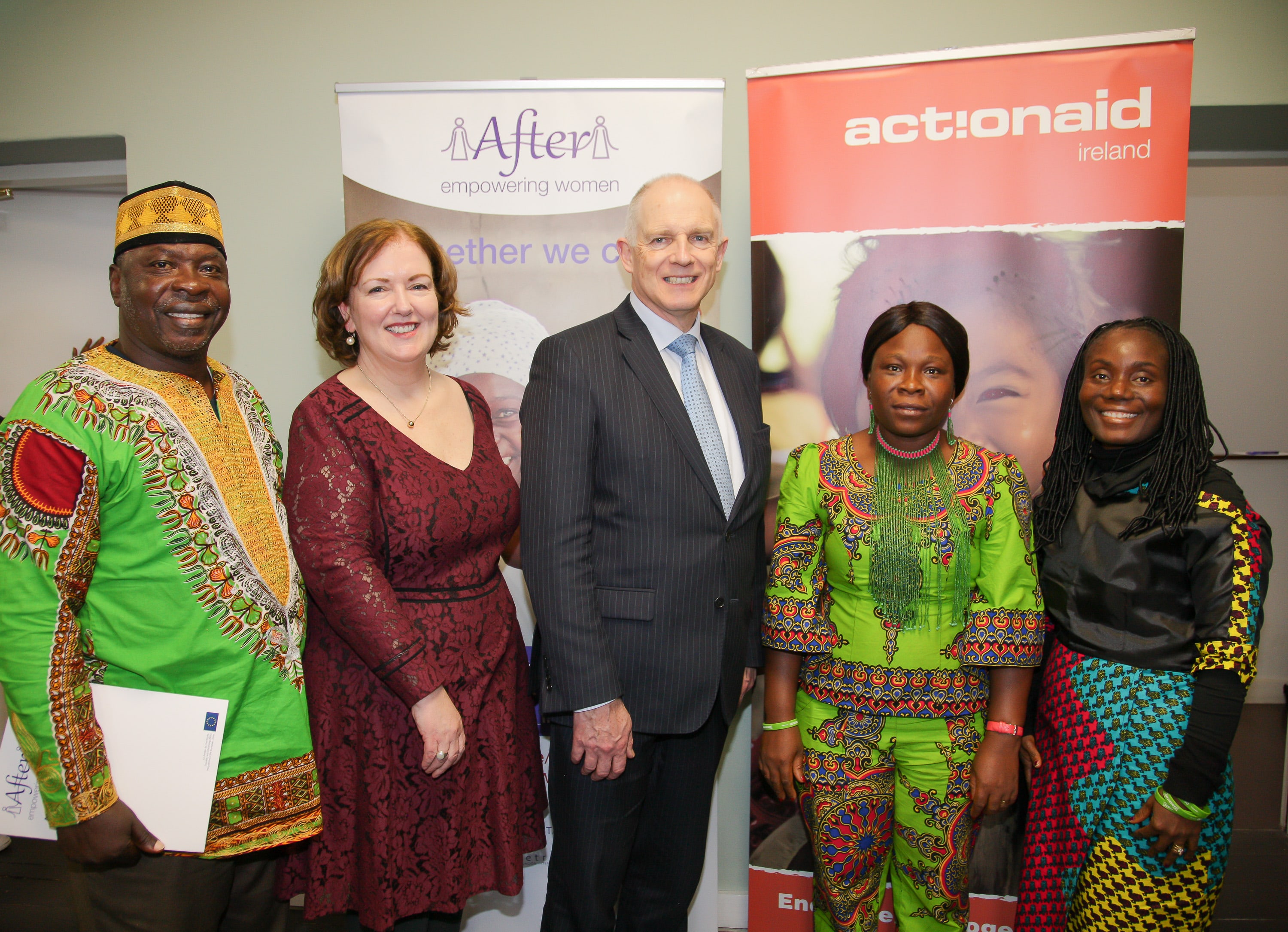 The Liberian delegation arrived in Ireland ahead of the United Nations International Zero Tolerance Day for Female Genital Mutilation.

They had a busy week packed full of events to raise awareness of this important issue including:

Presentation of recommendations to end FGM in Ireland

ActionAid Ireland held a Press Conference on 6th February, 2018 in the Royal Hibernian Academy in Dublin, to present the recommendations from the AFTER project to end FGM/C across Europe. Short videos produced by Respect For Change as part of the AFTER Project were also shown to policy makers, TDs, and media in attendance.

The recommendations for the Irish government were presented by AFTER Project Coordinator, Dr. Caroline Munyi. Deputy Leader of the Green Party and Dublin Rathdown T.D., Catherine Martin, Chair of the Oireachtas Women’s Caucus, also spoke at the event:

“There is always more that can be done, and that is where the politicians must step up and do what we can to fight this and shine a light on this issue. While we have made Female Genital Mutilation illegal, we still have to develop a comprehensive law on this matter, one, which does not simply focus on the prosecution element, but also works on prevention and protection measures. We must work to ensure there is funding and long-term supports when it comes to raising awareness on FGM and empowering communities to tackle it.”

Graduation Ceremony of the AFTER project

On 9 February, a special ceremony was held to mark the culmination of  the AFTER project in Cork. During 2017, we delivered workshops called ‘Empowerment Paths‘, to almost 100 women, girls and men in three Direct Provision Centres in Cork city.

Minister of State for Equality, Immigration and Integration, David Stanton T.D., who spoke at the event commended the participants and ActionAid’s pioneering work:

“It’s great to see the fantastic work being done by ActionAid to change attitudes towards this harmful cultural practice, and I commend the women who are now empowered to reject it. I’m delighted that knowledge and successful approaches drawn from projects overseas, and funded by Irish Aid, proved critical in this project, and will make a huge difference to the lives of at least 100 women and girls here in Ireland.”

Some of the graduates gave powerful statements about how the project had empowered them and they now have the tools and confidence to reject FGM/C. The ceremony was attended by civil society representatives and local Cork City Councillor, Mick Finn.

What can Ireland do to stop FGM?

Whilst it was encouraging to see the positive results there is a clear need to coordinate FGM/C prevention and survivor support services, and see them integrated as part of general public services across the country.

Based on the findings from the AFTER project, we recommend the Irish government:

These changes are necessary to see that women and girls from affected migrant communities in Ireland are fully protected, supported, and empowered to reject FGM/C in their families and communities.