Take the next step to end child marriage!

Will you help us provide a sanctuary for hundreds of thousands of girls like Abigail escaping forced marriage and genital mutilation today? It will only take you less than a minute to take ACTION and start changing their tragic fate.

Your donation helps to:
• Empower girls to understand and live out their rights.
• Confront the perpetrators of child marriage directly.
• Prevent Female Genital Mutilation – harmful practices that put at risk the lives of hundreds of thousands of young girls from Kenya, Ethiopia, and Nepal.

Take the next step to
STOP gender-based violence
and harassment at work. 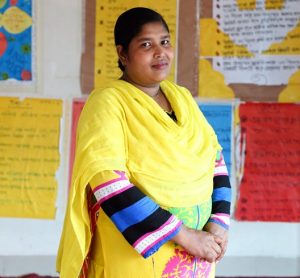 Nasima runs a cafe in Dhaka where she supports garment workers, mainly women, to understand labour law and their rights. Photo taken by Fabeha Monir/ActionAid

– Support our Women’s Rights Cafés – €5/week could help train a woman like Nasima to provide advice, training and psychosocial support to workers and survivors of violence or harassment in their community.

*Read “Nurjan knows what it feels like to be harassed at work” to see an example of the reality many worker women are facing daily at work.

It will take you less than a minute to complete the form below and join ActionAid’s community of kind donors to empower women workers in countries like Bangladesh, India, and Indonesia.

Nurjan knows what it feels like to be harassed at work…

Nurjan (pseudonym), 26-years-old, has been a garment worker in Bangladesh for almost a decade. She works as a senior machine operator for an average of 60 hours a week.

She says she got married at a very young age and is now separated from her husband. At work, the conditions are tough. Although women make up the majority of the workforce, they have no separate toilets and face regular harassment from male supervisors.

In an industry rife with power imbalances and where 8 in 10 workers have experienced or witnessed sexual violence and harassment, she believes this has put her at greater risk of abuse.

Nurjan told us: “I believe making clothes is an art. Because of this industry, a woman like me is still alive without any family support. Because I am a single woman and not guarded by any man, my supervisor thought I was vulnerable and exposed. He used to touch me at work. Verbal abuse is also extremely common. If we make a mistake, he compares us with sex workers and the factory with a brothel. We are workers who are earning money by working hard, we should not be treated in this way.”

You can make a difference for women like Nurjan. Will you make a donation today to support women facing sexual violence and harassment at work?