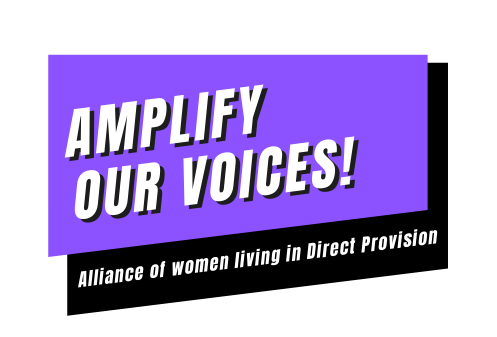 Amplify Our Voices is a programme and alliance of women who have lived or are living in Direct Provision.

These women have come together with the support of ActionAid Ireland to communicate their perspective of what needs to be prioritised as the government brings an end to Direct Provision.

The Amplify Our Voices 2021 Conference is taking place on 3rd December at 3pm over Zoom. The conference will focus on two of the most important considerations effecting people living in Direct Provision – mental health and privacy. Register for the  event here.

Who are the women of Amplify Our Voices? 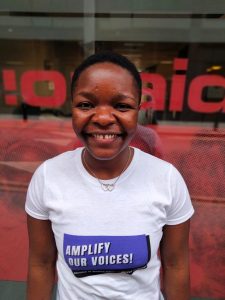 Rejoice Nkala is a Zimbabwean woman in her early thirties who has been living in Ireland now for 2 years. Rejoice likes Ireland but of course misses her family back home every day. She is a true optimist and loves to dance, being outdoors and considers music her best friend! Painting also is a true passion of Rejoices, who paints not only because she enjoys it but also because of the therapeutic nature of the process.

“The change I wish is for now and forever.”

Onyinyechi (or as she goes by in Ireland, Gift) is from Nigeria and she is passionate about peace, justice and equality. She is an avid reader and enjoys carrying out charity work, especially for the less privileged and sick. She hopes to one day become a nurse to further help people.
Onyinyechi became involved in the Amplify Our Voices project because she wants to see an improvement in the lives for asylum seekers not only now but for future asylum seekers. Onyinyechi believes that the life of asylum seekers is mixed, there are benefits as well as disadvantages. She believes a root problem for asylum seekers is that they don’t know their rights within or outside the system of direct provision.
Onyinyechi is also particularly passionate about ensuring vulnerability assessments happen for those claiming asylum in Ireland and that those in the system have access to services to help the most vulnerable. She always highlights her huge concern for people living in the system who suffer from serious mental health issues which has resulted tragically in people taking their own lives.
“I joined this project through this group to represent the voiceless in the system as to air their voices. And believe at the end it will create a positive impact in the lives of those who live in Direct Provision.” 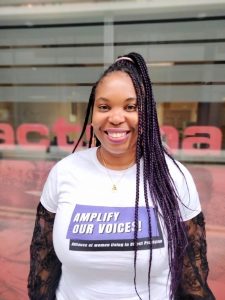 Molly has been living in Ireland for three years and originally comes from Botswana. Molly loves an adventure and is most happy when she is travelling and in nature. She adores cooking so much that one day she hopes to open her own food outlet here in Ireland, like she previously had in Botswana!
Molly joined the Amplify Our Voices project as she wanted to be part of the positive voice for change for those living in Direct Provision. She really hopes the project can help asylum seekers like her to know their rights. 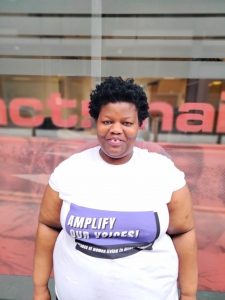 Ntombizodwa Mkhwanazi aka Zoe is a Zimbabwean woman who has been living here in Ireland since March 2019. Zoe loves to sing, and considers herself a “noise-maker”, i.e. Wherever Zoe goes there is noise! Zoe is an incredibly caring person, which is reflected in her work as she has worked in care homes throughout the coronavirus pandemic.

What issues is the project looking at?

The project has been developed in part due to the launch of the White Paper to End Direct Provision. The participants want to analyse from their own experience and that of other people with experience of direct provision what needs to happen as the state ends Direct Provision.

Below is a snapshot of the most challenging aspects of Direct Provision as raised by Amplify Our Voices participants. 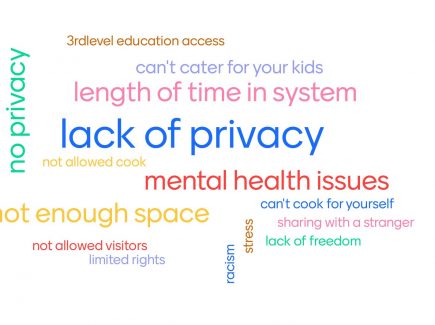 The AOV participants have spoken and surveyed other people living in direct provision and have found similar results to the above. From their own perspective and that of their peers they have determined they want to focus on the importance of privacy and mental health.

What is Amplify Our Voices doing next?

The participants have been engaging in evening sessions over the past four months that range from policy briefings on the White Paper, Introduction to Digital Conferencing, Marketing and a Masterclass in Public Speaking.

They will now use the skills they have developed to host an online conference where invited speakers will address what challenges need to be addressed in Direct Provision and what can be done now to tackle these challenges. 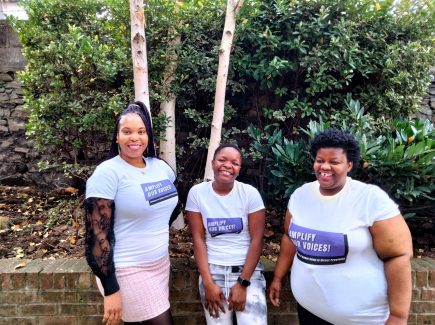 Find out more about the project by contacting Cillian – Cillian.quinn@actionaid.org