Until recently, there was no International Labour Standard to address Gender-based Violence (GBV) and Harassment in the World of Work. The ILO Convention seeks to address this but it must be ratified by each country’s government in order for it to take effect.

By signing this petition, you are urging our government to implement this law and thus beginning a positive change for workers across the world.

Tell the Ministers Heather Humphreys and Charlie Flanagan that you want Ireland to be one of the first* countries in the world to ratify the International Labour Organisation (ILO) Convention.

*By being one of the first to ratify the convention, the Irish Government will lead the way for other countries to adopt the Convention faster and will create an opportunity to change the law in low-income countries.

Rahima* 35, is a garment worker in Bangladesh. She works 12-hour days and is often underpaid, meaning that finds it difficult to pay for her three children to go to school.

“Sexual harassment is happening everywhere,” says Rahima. “If we can get a law that can give girls immediately justice, only then will the harassment situation change.”

*Pseudonyms have been used to protect women workers’ identities. 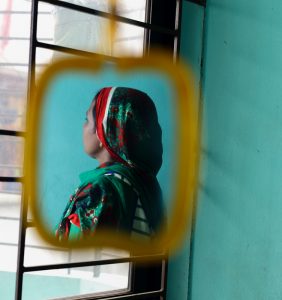 Sexual harassment experienced by women workers is the most reported form of violence. Around 35% of women – 818 million women globally – over the age of 15 have experienced sexual or physical violence at home, in their communities or in the workplace. Add your name today. 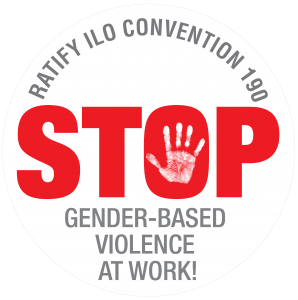 What is the convention?

The world’s Governments, employers and workers adopted the International Labour Organization (ILO) Convention 190 “Ending violence and harassment in the world of work” in June 2019. The Irish Government, IBEC and the Irish Congress of Trade Unions were active participants in the negotiations – now we want to see it become law in Ireland.

Why should Ireland be one of the first to ratify the convention and adopt its recommendations?

By being one of the first to ratify the convention, the Irish Government will lead the way for other countries to adopt the Convention faster and will create an opportunity to change the law in low-income countries.

ActionAid’s research into Irish law shows that while our laws are already largely compliant with the Convention, the time and expertise necessary to understand it could make it inaccessible to the most vulnerable in society. Laws that protect workers from violence and harassment appear within five different pieces of legislation. It’s likely that marginalised, migrant, and low-income workers could be unaware of their rights under Irish law. The Recommendation (R206) for the Convention includes strategies to ensure all workers are aware of their rights which could improve the lives of our most vulnerable workers.

As part of the adoption of the Convention, the Irish Government ought to update Irish legislation to oblige companies, through a series of effective incentives and disincentives measures, to take actions to eliminate all forms of harassment and violence against women in their supply chains.

Industries such as electronics, toys, entertainment, garment / fast-fashion and agriculture are all repeat offenders when it comes to dangerous and undignified working conditions. These industries are often based in lower-income countries, where employment laws offer far less protection against violence and harassment.